Read Ezekiel 28:12-19. What can we learn from this passage about the mysterious origin of sin?

Much of the book of Ezekiel was written in end-time symbolic language. In many instances, specific entities (like persons, animals, and objects) and local events are used to represent and describe broader cosmic and/or historical realities. In Ezekiel 28:1-10, the Lord spoke of the king of Tyre (Tyre itself was a prosperous ancient Phoenician port city) as a rich and proud ruler who was only a “man” but who claimed to be a god and who even sat (he claimed) in the throne of the gods. 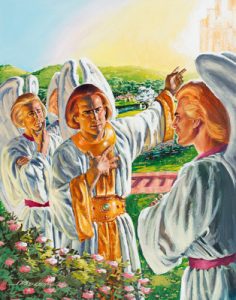 A crucial statement in the whole account is found in Ezekiel 28:15, which says, “You were perfect in your ways from the day you were created, till iniquity was found in you” (NKJV). Hence, and importantly, Lucifer’s perfection included the potential for evil, the potential to do wrong, and that was because, as a moral being, Lucifer possessed free will, part of what it means to be a perfect being.

In reality, Lucifer was created perfect — which included his ability to choose freely. However, abusing that perfection by the misuse of his free will, he became corrupted by considering himself more important than he actually was.

No longer satisfied with how God had created and honored him, Lucifer lost his thankfulness to God and wished to receive more recognition than he actually deserved. How this could happen with a perfect angelic being living in a perfect universe is, as already mentioned, a mystery.

“Sin is a mysterious, unexplainable thing. There was no reason for its existence; to seek to explain it is to seek to give a reason for it, and that would be to justify it. Sin appeared in a perfect universe, a thing that was shown to be inexcusable.” — Ellen G. White, The Truth About Angels, p. 30.